IMPERIAL COLLEGE Invent the Future Make-a-Thon: Thinking inside ThinkSpace, could the next big thing, be born within these walls? - ThinkJPC 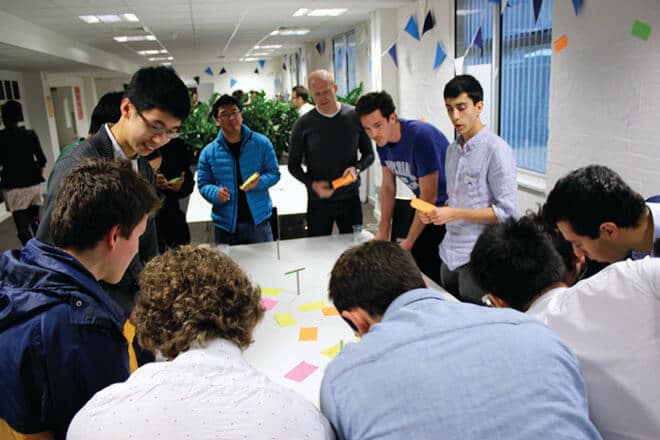 What is a make-a-thon, you might ask? It’s just like a hack-a-thon but for start-ups instead. Think startup-making in hyper speed. Imperial students could go from ideation, to prototyping to business planning in a single afternoon.

Throughout November and January 2014, visionaries and experts, scientists and academics are invited to engage in a series of make-a-thons to infuse the inspiration, life skills and confidence of successful entrepreneurs to the next generation of innovators, where they could literally ‘Invent the Future’. Diving deep into global issues, our would-be entrepreneurs get together to generate game-changing ideas and build them into viable solutions.

The keynotes feature a who’s who of leading experts and thought leaders to provide rich and diverse perspective, debate and conclusions across: health, resources/climate and life-work-play in the future.

We caught up with Mark Hammond – Director at Imperial Create Lab (a collaboration between Imperial Innovations and the students of Imperial College) after the first event.

What key learnings do you think students took away from the event?

The aim was to help students realise that building a high growth scalable business is within reach immediately after graduation. Critically we wanted to help students understand that they have a much higher chance of success if they look for substantial pains or gains across a wide range of industries rather than trying to produce variations on the popular consumer app of the moment.

We also try to show students that entrepreneurship is not that different from science in terms of being a process of repeatedly setting hypotheses and testing until a viable model is found.

Why are events like these (make-a-thons) so important in your opinion?

As with start-up weekends and hack-a-thons they force people to get started. It’s easy to theorise about ideas forever but ultimately no one knows what will work in the market until they start getting user feedback and that’s a lot more effective with something to show even when it is only a rough prototype. They are also fantastic for bringing people of diverse backgrounds together which increases the chance of creating novel solutions and strong teams over time.

What is the single greatest challenge/barrier to anyone starting a business?

Willingness to learn. Recent advances in technology, online education and funding mean that entrepreneurship really is within the reach of anyone, even with very little capital. The hardest thing seems to be just getting over the awkwardness of talking to potential customers, asking non leading questions and taking that feedback on board as opposed to focusing on a rigid initial idea.

Which team won on the day? What did they come up with and why were they chosen above the rest?

Stress Roulette, as chosen by the students at Imperial College. It is an app to try to address the stress of everyday life. The user is randomly paired with someone who is stressed, and in return for helping them to calm down, the user earns Karma points that they can redeem next time they need to let off steam. Video pitch: https://goo.gl/NoMeKP

Stay tuned and watch this space for ideas these bright young things come up with at our next events: Invent the Future Clean Tech and Life-Work-Play Editions.

Wednesday, 22nd January 2014: Invent the Future- Life-Work-Play in the Future