Digital Democracy: how would you vote? - ThinkJPC

2016 is ​an important year at the polling booths. With ​today’s London Mayoral elections ​a​nd the fiercely contested Brexit debate​ scheduled for​ June, there has never been more of an opportunity for our voices to be heard.​ But while as a nation we’re becoming increasingly digitised, tech-savvy and impatient, the traditional paper slips and library queues we use to cast our votes are holding us back. Last year’s Digital Leaders​ ​​Annual Lecture​ ​looked at the progress being made to move the UK​ ​​to​ ​a digital voting system​, and while the security concerns are still relevant today, as ​our technology knowledge ​and the solutions on offer ​grow we need to tick the digital voting box soon, or get left behind…

In 2015 almost £1 billion was invested in London tech firms, a figure expected to continue to grow. And yet a nation whose capital city is hailed as ‘world leading’ in tech, will still elect its next leader on a ballot paper in a public library.

While many won’t think to question this age-old process, is the community of digitally savvy voters finding it lengthy and inconvenient? The government’s online voter registration and 5-year digitalisation agenda move one step closer to digital democracy, but these ideas are playing catch-up to existing technologies not anticipating the changes to come.

By 2020 will a connected device enable UK voters to log in from anywhere in the world? Will it integrate debates from social media – and how will it manage the lucrative data held by these platforms? Will it be secure enough to withstand a cyber-attack so sophisticated that today’s developers cannot predict it?

We’re used to adopting digital alternatives, be it for managing bills, ordering a weekly shop or planning travel. So why is voting not included in this list? This was the topic at this year’s Digital Leaders Annual Lecture at the Houses of Parliament as panelists debated where the UK’s digital democracy was heading.

Tinder Foundation CEO Helen Milner started the event with a lecture based around three statements:

1) People are just people. They need to be engaged, to have debate and to have dialogue.

2) Technology is just a tool that people use.

3) We can’t talk about digital democracy without talking about democracy.

These might not seem revolutionary, but when brought together they create an interesting idea. Yes people are glued to their phones, engage through social media and enjoy technology shortcuts every day, but would they be happy to use a similar platform for something as significant as voting?

Democracy should be about debate and engagement, whereas the digital sphere is too often consumed by anonymity and hype. Would an electronic voting system actually compromise what democracy should be? If reduced to an online tool rather than a physical paper to be filled out and posted by hand, would we become detached from the decisions we’re making?

Helen also talked about the recent Digital Democracy Commission (DDC) and the goals that have been developed for the UK; to make all information and broadcast footage from Parliament available online by 2016 and to have Parliament fully interactive and digital, with secure online voting an option for all by 2020. However as one audience member pointed out, these “quaint” ideas are incongruous to London’s tech-city culture. In the midst of the talent, innovation and technologies across the UK, why has our voting system stayed the same for so long?

According to the panelists, tradition, security risks and the digital talent gap are delaying progress. A process as data sensitive as voting needs to have a security guarantee against hacking, fraud and interception and, the panelists suggested, there wasn’t yet a technology that could offer this. Frustratingly, at no point was it suggested that if the tool or platform didn’t exist, we should build it. Yes the stakes are high; the information is as confidential as it gets and the impact of a security breach would be crippling. But isn’t the greater risk that the digital natives will get tired of an analogue voting system?

Predicting technology is as tricky as declaring who will win on May 7th. We struggle to anticipate what will have changed in 12 months, let alone 5 years! And as technology evolves, so too do the expectations and behaviours of users; following trends, switching loyalties and ultimately leading the direction in which technology is headed. If users don’t like the functionality or design of something, they simply won’t use it.

So rather than outline the technology the Government is aiming to offer in 5 years time, shouldn’t they instead focus on how people will want to interact with it and work from there to build something that is secure, responsive and evolving?

Whether it’s by checking a box, sending a text or logging on to an app, I’d vote ‘yes’. 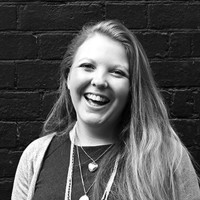 Fame Claim: Hannah from S Club 7 follows me on Twitter…